One of the things I like about being an English teacher is that, depending on the teaching context, you can take a variety of different topics to class and discuss it with students.

For the last few days the terrorist attacks in Paris have dominated the news and I wanted to hear what my students have to say about it. It can be a controversial topic, but I haven’t been afraid of tackling those in the past.

To begin with, show your students a picture related to the attacks (such as the one below) and elicit from them what the picture is about. 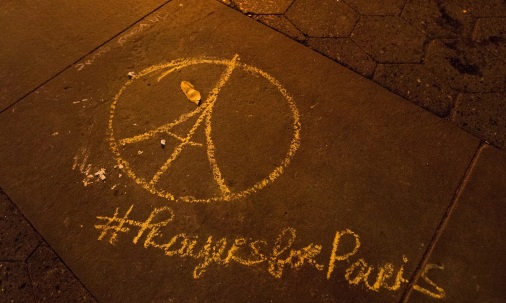 Ask students how much they know about the attacks and then, in pairs, get them to answer to follwoing questions.

Hopefully these questions will lead to an animated discussion. After a few minutes of pairwork, make this a whole group discussion and ask students to report their opinions to the rest of the group.

Tell students that they are now going to read an article about the attacks from a British newspaper. The original article can be found here and my adapted version is below.

After students are finished, get them to compare their answers in pairs, then elicit answers from the whole group.

As a follow-up question, ask students to discuss if they think these kinds of attacks might happen in Brazil in the future. If students are really into the topic, you could ask them if they think we are on the verge of another World War.

In addition, you can go back to the text and work with some vocabulary. I suggest working with the following items.

to bear some responsibility

Depending on the level of your students, you can provide definitions fo them to match, or ask them to deduce meaning from context. Higher level students are likely to have come across at least some of them, so you could ask them to create their own definitions and then compare it with other students came up with.

Use some contextualized questions to give students initial practice with these words and phrases. They can be related to the topic of the class (such as the first few questions) or unrelated.

You could then ask students to create their own sentences using these words and phrases.

Finally, you could also get students to listen to the victims of the attacks.

There are three interviews here but I used only one of them, from Amelie (1:25 to 2:22). My while-watching question was ‘how does Amelie describe the attack?’

As a follow-up you can ask students if they think they would be able to talk about such a terrible event with the same calm and courage that Amelie did.