Earlier this year my friend (and former student) Isabella Ferraro shared a lesson with me she had taught to her adolescent students. I thought it was interesting, but at the time couldn’t quite find a group to use it with. Now recently I was organizing the files on my computer and came across Isabella’s lesson again.

This time around, however, I had two students that I thought would be perfect to discuss emojis with. This is what came out of it.

To begin with, you could set the context by having students discuss the following questions:

After a couple of minutes, turn this into a whole group discussion and focus on the last question. Then tell students they are going to watch a video where Ellen DeGeneres talks about the topic of Emojis. A simple while-watching questions could be

You could also focus on the specific emoticons she discusses and ask students to say how younger and older people see them.

Now tell students they are going to read an article about emojis from the Evening Standard. Here are some while-reading questions that can be used with the text.

The original article can be found here and my adapted version is below.

The newspaper also created some new emojis for Londoners. There are ten of them in the article, but to make things simpler only six will be used for the next activity.

Show the picture below to students and say these are six emojis Londoners shouldn’t have to live without. Get them to answer the questions in pairs. 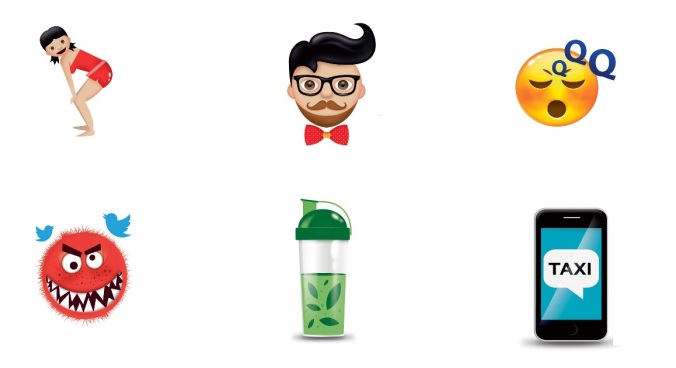 The meanings are, from left to right: twerking, hipster, waiting in a queue, troll, detoxing and let’s get out of here.

At this point, if you have artistically inclined students, you could get them to create their own emojis, based on the needs of Brazilians.

Alternatively, you could decide to explore the text for language. If you do so, I’d recommend working with the following words.

Finally, in order to give students a chance to practise the language in context, you could get them to discuss the following questions.

2 thoughts on “Emojis you shouldn’t live without”