Whenever possible I try to illustrate new language students come across with a video snippet. I believe it helps make the language more memorable and it’s also a great way to work on pronunciation features like connected speech.

So, last week, after using a text to talk about the protests in Brazil, I was looking for a video with the phrasal verb ‘fed up with’. The snippet I found had so many interesting bits of language (including not my cup of tea) that it ended up becoming a lesson on its own.

New Girl may not be as popular as other TV series like the Big Bang Theory, so it’s important you introduce the characters to your students before watching the video.

You could, for example, show a picture of the main characters and ask if students know them. If they don’t, introduce the four main characters, Jess, Schmidt, Winston and Nick).

Something else that can be done as a pre-watching activity is getting students to discuss in pairs whether they prefer comedy or drama series and what their favourite series are. This should allow you to choose series they are interested in for future lessons.

Before watching the snippet, show students the while-watching questions. When eliciting answers, ask students to explain their reasoning for the second and fourth questions, as these are more about their own opinions than a right or wrong answer.

The language I chose to work with for this snippet is based around phrasal verbs and other words and expressions that may interest students. You can go about it a couple of different ways.

One possibility is giving students a script of the scene with gaps. Students then watch the snippet again and try to fill in the gaps. This is particularly interesting to test understanding of connected speech features.

You could also show students the sentences with the target language, but with part of the words covered. Here you can ask students to tell their partners if they remember any of the words before letting them watch the snippet again. 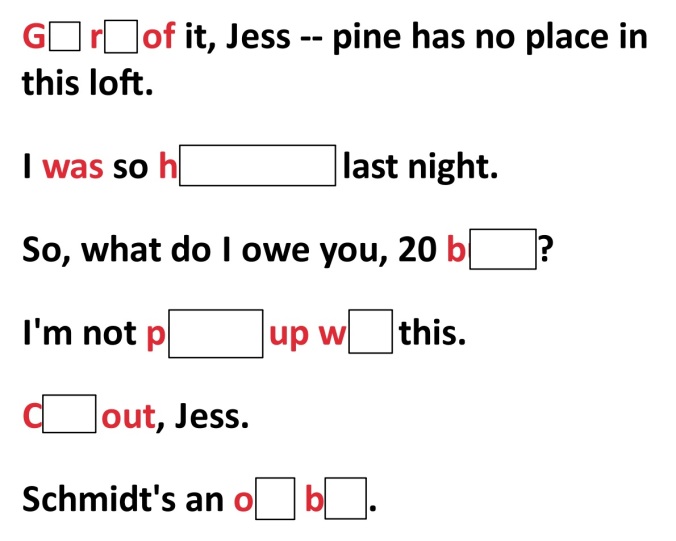 B2 students should be able to guess the meaning of the words and expressions they don’t know from context, but if you decide to use this with B1 students, you may want to provide them with definitions to match to each expression.

Before moving on to the discussion questions, there’s a good opportunity here to point out and practice catenation, which is very common in phrasal verbs. Elicit from students how ‘get rid of it’, ‘chill out’ and ‘putting up with’ are pronounced and drill it with students. I also like to talk about the difference pronunciation of T in ‘put up with’ in American and British English.

Finally, you could get students to practice the target language by providing them with some conversation questions.