I’ve been teaching for a little over 11 years now, mostly at Language Centers. One thing every place I have worked at has in common is the use of coursebooks. Some came from international publishers, others were produced in-house. Some were more up-to-date or more interesting than others. Whatever their flaws, I can safely say I have taught some of my best lessons using coursebooks.

This has been a recent topic of discussion in the BrELT chat, and I would like to offer my two cents on how to approach some of the things I find good and bad about coursebooks.

Make the most of what they offer

One of the things I like about modern coursebooks is that they are reliable source of texts and listening texts (henceforth referred to as texts). Contrary to what some may say, I tend to find them interesting. Also, if I am being honest, sometimes the great thing about coursebooks is that they are there. I am a big fan of authentic materials, but those tend to be time-consuming in terms of preparation.

What coursebooks often don’t do, in my opinion, is explore the lexis in texts to its fullest extent. Texts are often used as a way to explore grammar patterns at the expense of vocabulary, which is often relevant for students. This is where I think the teacher can make a difference by making students aware that there is more to these texts than they might realize.

Take for example a listening activity from an advanced (CEF C1) coursebook I use. The topic is crime and the coursebook provides some relevant pre and while-listening questions. The listening, then, is explored with grammar in mind (prepositions in relative clauses, in case you are wondering). There is nothing to stop you from using the tapescript, though, in order to delve into the rich vocabulary students would likely ignore.

I usually select words/expressions/chunks of language from the script and try to get them from passive vocabulary into active vocabulary. I try to find pieces of language that students may already know, but might not use in speaking or writing. I also choose things I imagine students have not come across, but I believe it is important not to choose lexis just because it is “difficult”.

So, after carrying out the listening activity as usual, I put the selected words/expressions/chunks on the board and ask students to find them on the tapescript. I think it is helpful to have them in the same order they appear on the script. Moreover, if it is a long script or if there are multiple speakers, it might be worth pointing out where students can find the language they are looking for. In the example below, the numbers in red indicate which speaker used each expression. 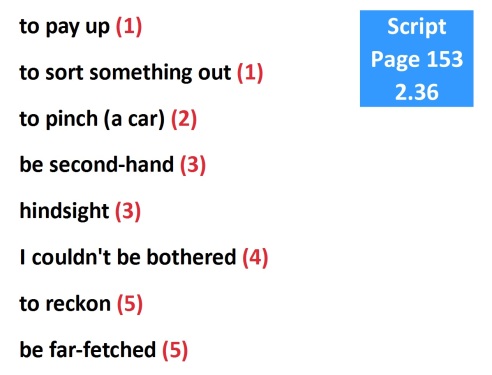 From there, you can put students in pair or trios and get them to guess the meanings from context. Alternatively, you could possibly provide them with some definitions to match. If you have access to an Interactive Whiteboard, students can go to the board and match the definitions themselves.

I follow this up with questions I think my students would find interesting (in this case they are 15 to 17 year-olds). By having them find the expressions on the script, talk about their meaning and then answering questions you are exposing students to the language multiple times. This, in turn, increases the chances they will be able to use these items in the future. 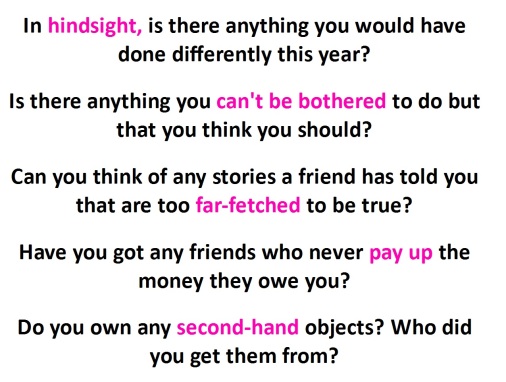 Come back on Thursday for part 2, where I talk about things I don’t like so much about coursebooks and how I adapt them.